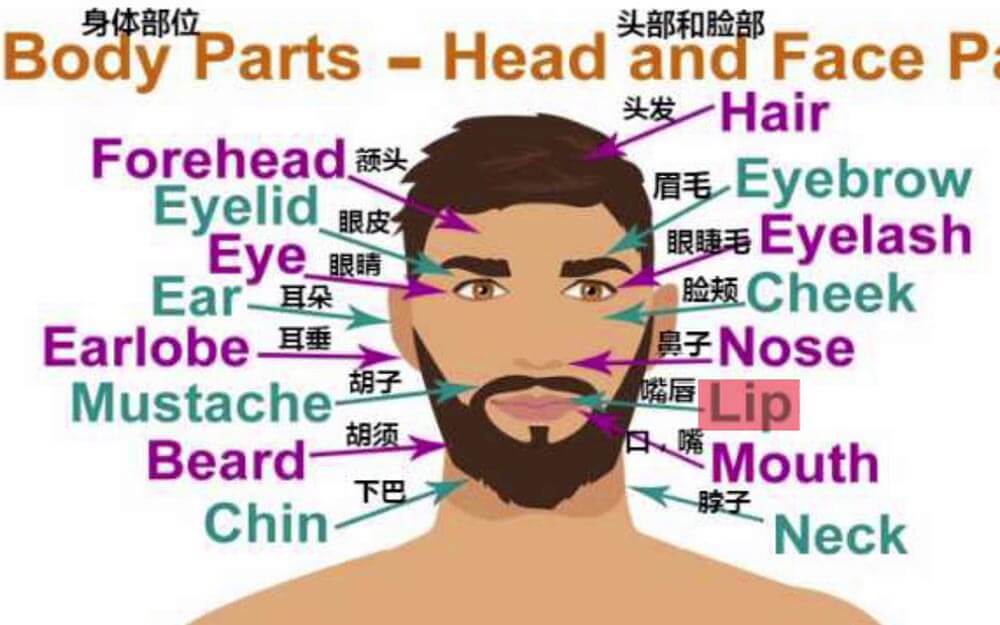 1. Head
The head is thought to be the most important part of the human body. So a leader is often compared to a head (首脑). Thus we have Head of State or the head of a delegation.

The head is where the brain is located. It is naturally associated with ideas and intelligence. Very often, we need other people’s ideas and opinions when we want to do something well. The is because two heads are better than one (三个臭皮匠顶个诸葛亮).

The eyes are extremely precious to us. That is why we say” Mind your eye (当心)! when we reminding someone to be careful.

Not only human beings and animals have eyes, many things also have” eyes” the eyes of a ship, the eye of a needle, the eye of a typhoon, and so on.

The ear is the organ of hearing. A piece of light music is easy on the ear. (悦耳动听). We are usually all ears (专心聆听) for bit news.

When they think somebody is overhearing, English people use either of the two proverbs: Walls have ears (隔墙有耳) and Pitchers have ears (壶罐有耳). They also think that little pitchers have big ears(小孩子耳朵尖). Nice boys and girls respect other people. They will not secretly listen to others’ private conversations.

The English phrase “face to face (面对面)” and its Chinese counterpart(对应) are exactly the same. But English people, to express the same idea, can say nose to nose instead. There is no such substitute in Chinese.

The word nose appears in many idioms. Here are two which are quite similar to their Chinese equivalents: lead somebody by the nose (牵着某人的鼻子走) and turn up one’s nose at somebody or something (对某人或某物嗤之一鼻).

English people can say as plain as the nose in one’s face (一清二楚) to mean “very obvious”. May be to them, the nose is the most conspicuous part of the face.

We have two lips: the upper lip and the lower lip. If one’s two lips are closed, one cannot speak. So it goes without saying that “don’t open your lips (不要开口)” means “don’t speak”.

His lips are sealed. Are his lips really stuck together by wax or glue? No, his lips are sealed when asked about something that he must keep secret. Sometimes a top secret is betrayed because it has escaped someone’s lips (脱口而出). Then the incident may become a piece of news that is on everybody’s lips (众口相传).

We all know we cannot speak without the tongue. So the tongue is closely related to speech. To hold one’s tongue (保持沉默) means “to keep silent”. A person who has too much tongue (太多嘴) is disliked by all, for he is too talkative. Mother tongue is not the tongue of a mother: it is a person’s native language.

“Don’t you have a moth below your nose (你鼻子底下不是有张嘴吗)?” The Chinese say so to blame a person who did not say what he should have said. But this not the right way to express the idea in English. English people would say, “You have a tongue in your head, haven’t you?”

Face has to do with the idea of respect and dignity both in Chinese and English. You lose your face (丢面子) if you fail again and again, but a decisive victory will save your face (挽回面子) after all your failures.

When you feel unhappy, you pull a long face (拉长脸). The idea is conveyed in Chinese in the same way. But “about face (向后转)” does not refer to the face. It is a military order to turn round and face in the opposite direction. It is the exact equivalent of ” about turn”.

The shoulders can bear heavy things. Your father has a great responsibility for the family on his shoulder. When faced with difficulty, the family should stand shoulder to shoulder (肩并肩) to overcome it. You should not turn a cold shoulder (不理睬) to your family members. Nor should you give your friends the cold shoulder (冷落朋友). Both expressions mean treating others coldly.

A good host is hospitable to his guests. But, if guest is tiresome, the host is glad to see his back (他离开).

If your friend has done something really well, you may give him a pat on the back (轻轻拍背部) to show your appreciation.

If you turn your back on somebody (不理睬他人), you mean you do not like making friends with that person.

Many other expressions make use of the word heart. A lover can be called a sweet heart (情人). The Purple Heart (紫心徽章) is a medal given as an honor to American soldiers wounded in battle.

If your friend is in trouble, you may encourage him by saying “Don’t lose heart (不要灰心).”

Stomach can also be a verb. Look at this example: “How could you stomach (忍受) such rude words?” Apparently, stomach here can be replaced by “tolerate”.

We all know an arm is not very long. But when you keep someone at arm’s length (保持距离), the distance is long enough. For that means you don not like that person and you try your best to avoid him or her. We should indeed keep the bad friends at arm’s length.

Quite a number of phrases formed form the word hand are very similar to their Chinese counterparts. Here are some obvious examples: a fresh hand (新手), short of hands (人手短缺), hand in hand (手拉手) and wash one’s hands of something (洗手不干了). But do not always take this for granted. Study these examples and you will understand.

He lives from hand to mouth (He has just enough money to live on). We gave them a big hand (We gave them lots of applause).

How many fingers does each of your hands have? Now let’s name them in English from the smallest: the little finger, the ring finger, the middle finger, the index finger and thumb.

Each finger has its own part to play. If your fingers are all thumbs (笨拙), that is too bad. That means you are very clumsy.

If you see two of your classmates fighting tooth and nail (又抓又咬), you must stop them at once. Otherwise, at least one of them would be hurt.

Nail also means a thin pointed piece of metal for hammering into something. But it is related to the body in this sentence: “Peter is as hard as nails (结实的象铁打的).” We all hope that we are as strong and healthy as he is.

The word leg appears in many colloquial expressions. At a party, when you feel like dancing, you can say to a good friend of yours, “Let’s shake a leg.” Obviously, it means ” Let’s dance.” When you want your fiend to hurry, you can also “shake a leg”. In American English it means “hurry”.

The arms and legs are very important to us. Therefore when asked why you are not going to buy something expensive, you may answer, “It costs an arm and a leg!” You mean that it is really expensive. If you pull one’s leg, it means you make fun of someone.

To convey the idea “from head to foot”, English people san say from top to toe. But Chinese people don’t.

When faced with danger, we must be alert and ready for action, that is to say, we must be on our toes (保持警惕).

Most people will only think of the hair on our head when the word hair is mentioned. In fact, some animals and plants also have hair.

A horrible scene may make a person’s hair stand on end (毛骨悚然). But a courageous person will not turn a hair (不畏惧) even though he is in face of danger.

Sometimes, a friend of yours may be so angry that he may act foolishly. Then you had better give him this advice: “Keep your hair on (别发脾气)”.